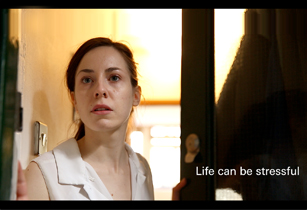 Matthew Holder, head of campaigns and engagement at the British Safety Council, said, “The Last Word is made to warn people that being tired, distracted and unable to fully concentrate can make simple tasks like climbing a ladder more dangerous. Aimed at employees, it contains a warning that being stressed can endanger their lives. However, the film is also directed at employers, showing how important it is that managers and supervisors identify the symptoms of stress and help their staff to deal with it. As the film says, life can be stressful but people need to be aware of the danger signs.

“It is well documented that stress is a significant cause of sickness absence, undermining both productivity and profitability. What is less discussed is how stress can endanger lives. Evidence shows that stress significantly contributes to injuries in sectors such as construction, transport and agriculture. In the medical profession, stress is a major predictor of work-related accidents and there are strong links between fatigue and sharps injuries.”

The film is part of the British Safety Council campaign ‘Speak Up, Stay Safe’  targeted at younger employees to raise their awareness of risks at work. It’s the first time the campaign has tackled stress.

There is a lot of statistical evidence demonstrating the consequences of stress at work:

– Stress is believed to be a major cause of accidents in the workplace, with evidence showing that 60-80 per cent of accidents are related to workplace stress.

– A survey of 2,500 doctors found that job stress was a major predictor of work-related accidents. Fatigue, in particular, is associated with a threefold increased risk of sharps injuries in medical trainees compared with other healthcare workers.

Stress is often discussed in relation to sickness absence. However, it’s less reported how it can endanger lives. Some research shows that up to 80 per cent of accidents are related to stress at work. Whether it is work-related stress or stress that people bring to work, stress can put at risk the safety of both employees and members of the public.