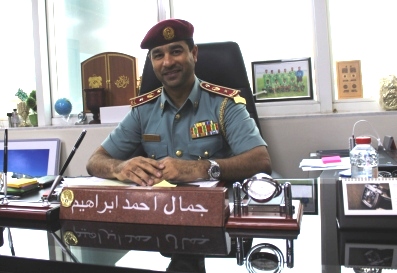 As the emirates await the release of the 2016 UAE Fire and Life Safety Code, Dubai Civil Defence’s Lietenant Colonel Jamal Ahmad Ibrahim spoke exclusively to Health, Safety & Security Review Middle East about new clauses and amendments that have been introduced in the updated version

The Dubai Civil Defence (DCD) is set to launch the 2016 UAE Fire and Life Safety Code in the coming weeks as the UAE seeks to reduce fire incidents in the country. Built on the 2011 version, the updated code has prescribe guidelines for builders and consultants to ensure a fire-safe environment. The code has been designed in cooperation with contractors, construction equipment manufacturers and building experts. The DCD plans to take tough measures including levying fines on those who fail to comply with fire safety standards.

Speaking about why safety is of utmost importance in the UAE and in particular, Dubai, director of the preventive safety department at the DCD, Lt. Col. Jamal Ahmad Ibrahim, said, “Dubai is not just a city. It is a brand that means value for investors and residents alike. This is the reason why we need to create a safe emirate. Not just in terms of saving lives, but securing properties as well.” When asked about a fire incident that took place at an under-construction hotel site in 2016, the director stated that even with prescribed rules for safety in place, contractors failed to understand the perils of nonconformity to safety regulations. “The building in question lacked safety measures such as access to the top floors and a water pump nearby. Investigating further, the DCD realised that the contractors did not follow safety standards as prescribed,” he explained.

With a new chapter dedicated to responsibility in the 2016 UAE Fire and Life Safety Code, the DCD now aims to hold people accountable for fire accidents in the future. This means that owners, builders and even occupants will all be answerable to the DCD. “Most times, we see that violations occurring in homes like children playing on balconies, misuse of electronics and overheating of sockets. These violations need to be put in check and tenants will be held accountable,” Lt. Col. Ibrahim warned, adding, however, that the biggest responsibility will rest with consultants who approve faulty structures.

Accountability
Once the new code is in place, the consultants will be the ones at the receiving end if a building is unsafe, in terms of fire and life safety, according to Lt. Col. Ibrahim. “Consultants approve a building’s architecture and then pass it over to us. If the consultant does not follow the tiniest of safety details, the aftermath could be disastrous. This is the reason why they need to be held accountable,” he states. The new code will outline practices that consultants would need to follow, among which is the requirement to employ fire engineers who will liaise with building consultants. Focussing more specifically on fire engineers, Lt. Col. Ibrahim revealed that the DCD, in partnership with professional trainers, will train engineers to become specialists in fire safety regulations.

“The training is mandatory and every consultant in the UAE will have to employ fire engineers, certified by DCD,” Lt. Col. Ibrahim noted. He also added that the benefits of consultants working with fire engineers are enormous and profitable. “Every consultant who hires a NFPA-approved fire engineer will receive design approvals on priority basis. Each fire engineer will be given a username on the DCD system, which will help them receive direct approvals. However, the DCD will still carry out building inspections and will have final authority. If there are gaps in the designs, the consultants will be held responsible,” he asserted.

Quicker response times
In an attempt to move towards efficient fire rescue operations in minimum time in Dubai, Lt. Col. Ibrahim divulged that the DCD is building five additional fire stations in the emirate. “Our earlier response time to reach incident sites was six to eight minutes. Now we are aiming to halve that response time to four minutes. We are redesigning and building five new fire stations located at strategic points so that the distances covered are shorter and more easily accessible,” he said.

The DCD also plans to build fire stations within landmark projects in Dubai and is currently in talks with big developers. “There will be in-house fire stations at Dubai Parks & Resorts, Dubai Museum, Dubai Investment Park, Mall of the World and Sheikh Mohammed bin Rashid Football Stadium. These will ensure minimum response times. “At the Expo 2020 Dubai site, we will have two fire stations – one permanent and the other temporary,” he affirmed.

New technology in town
As the UAE attempts to go by the fire safety rule book, the DCD is also utilising newer technologies that will help improve safety. Lt. Col. Ibrahim revealed the DCD has initiated a radio frequency identification (RFID) project that will help tackle construction violations like the use of unregistered and counterfeit products.

With the RFID technology, the DCD can monitor and control the movement of all equipment registered with the body. This way, tracking and maintaining ownership data of building materials will be made easier. Also, only registered materials will be allowed to be used in new buildings in the UAE. The DCD has strict regulations already in place regarding the use of fire and life safety materials. With RFID technology in place, safety practices will become even more stringent and monitored. While the final touches are being made to the 2016 UAE Fire and Life Safety Code, the update will give the country the impetus to fulfil the UAE Ministry of Interior’s vision of a ‘safer and more secure country’.

Dubai Civil Defence will be making a presentation on the UAE Fire and Life Safety Code at the 2nd Annual Health, Safety & Security Forum 2016