Hot- and cold-spot tracking cameras to debut at Intersec 2016 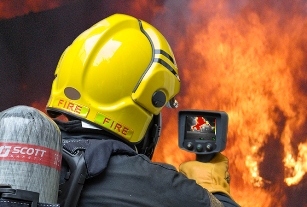 Using this technology, firefighters can instantly see and create paths through cooler spots and avoid the highest risk areas, such as floors or ceilings likely to collapse in blazes, says the company. The cold spot tracker enables first responders to locate and pinpoint thread or valve gas leaks because gas will be colder than the environment that surrounds it.

Scott Safety will also be introducing its newly extended range of portable gas detection solutions at Intersec. The PS200 and PS500 series can be tailored to simultaneously detect four and five gases respectively. These devices are equipped with penetrative and distinctive audio and visual alarms and customisable capabilities.

Paul Shaw, marketing manager at Scott Safety, said, “The company has developed a portfolio of innovative and reliable products that will reduce user burden and incorporate real-time telemetry, situational intelligence and communications in hazardous environments. The technologies can be fixed or portable to provide intelligence on the specific make-up of the fire and highest risk factors.”

Scott Safety has a training, serving and assembly facility in Abu Dhabi. The company’s products will be on display at stand 3-H32.