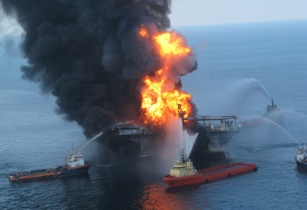 What challenges do these businesses face and, ultimately, what is being done to overcome them?

The demand for power is rising, with global energy consumption set to rise by 41 per cent by 2035, according to the BP Energy Outlook. As the energy-producing countries in the Middle East continue to invest in new, unconventional methods of fuel extraction, it becomes increasingly important for companies to have a thorough and effective health and safety policy in place.

A health and safety policy is standard in any industry, but it has particular significance in the oil and gas sector. As both upstream and downstream operations involve such large-scale projects and deal with highly hazardous materials, the slightest incident can have devastating repercussions for the individuals working onsite, as well as the surrounding environment.

An explosion at the Deepwater Horizon drilling rig in the Gulf of Mexico in 2010 resulted in the death of 11 workers and reportedly saw approximately 780,000 cu/m of oil leak into the sea causing far-reaching damage to surrounding wildlife, in one of the largest oil spills in US history.

Furthermore the Deepwater Horizon spill had a significant financial impact, costing the rig operators BP billions of dollars in cleanup and compensation. Accidents in the oil and gas industry, however minor they initially appear, can have a huge impact on a company’s business. As well as the price of fixing the incident, a bad reputation for health and safety can result in rising insurance rates and the risk of losing profitable business.

Andy Gibbins, Euro Petroleum Consultants' (EPC) vice-president for Middle East, told Oil Review, “An insurance company looks at the performance of companies and uses pubic data as a means of assessing how well they’re performing, and that [a bad health and safety record] can result in insurance premiums being increased or in some cases the company has refused to cover an organisation.”

According to the report Process Safety Events – 2011 & 2012 Data by the International Association of Oil and Gas Producers (OPG), the fatal accident rate for its participating companies in 2012 increased by 27 per cent on the previous year. Furthermore, 40 workforce fatalities were identified as being related to process safety events. A process safety event is most commonly understood as an uncontrolled release of material, often toxic or flammable substances, from the operations of a facility. As such, these events so often cause the biggest consequences and greatest destruction, such as the explosion at BP’s rig in the Gulf of Mexico.

Ultimately some of the worst accidents of the oil and gas sector were caused by a mistake of one individual working on the project. This is a topic explored in the report Increasing Operational Efficiency and Workforce Productivity without Compromising Safety – an Offshore Nirvana? by Steve Elliott, process safety expert for enterprise software provider Ventyx, an ABB company.

In his report Elliott said, “At the end of the day, it all boils down to human ‘error’. After all, if systems are designed by people and built by people, then a systemic oversight is nothing but a human oversight.”

Whether the problems lie in negligence during the design stages, insufficient training, or a lack of experience, is it ever possible to achieve a 100 per cent safety record or will human error always be an obstacle?

Elliott underlines the high turnover of employees – a common theme in the Middle East – as a catalyst of human error onsite. He argues that with every member of staff that leaves they take with them the knowledge on running the site, particularly the experience in the less common, less day-to-day tasks that might occur.

“The tacit, expert knowledge required to ensure safe and reliable operations is being lost as an ageing workforce is being replaced by a highly mobile younger generation,” Elliott explained.

Gibbins, on the other hand, highlights the multi-cultural nature of workforces in the Gulf as a key factor to tackle when training staff. In order to ensure optimal safety of operations and the workers themselves, companies must recognise the problems that arise when working with a mixture of nationalities, cultures, and religions.

Gibbins said, “We have a very big focus on the local cultural issues, because these are very important in the Middle East. For example you may have a site with a lot of employees who have an inherent belief in fate so [might think] why should they wear a safety helmet or why should they wear safety shoes when it doesn’t matter?”

Furthermore, he explains that some companies fail at something as simple as language barriers and making sure a multi-national workforce has fully understood the training programmes, which are primarily given in English.

“The good companies will try and recognise it and make sure they bring in some additional support using the local languages of the particular people involved,” Gibbins added.

Middle Eastern companies are not going to achieve optimal operational safety through just monitoring their own staff. Businesses are increasingly aware of the importance of independently verifying the staff they take on via smaller contractor companies.
“One of the biggest risks that exists, not so much in the big companies but the smaller companies,” explained Gibbins. “You get exaggerated CVs, where people say they have a particular skill or qualification but in some situations that is not the case.”

Without naming the business, Gibbins refers to one operating company that carried out a thorough survey on a service company and found that 50 per cent of the CVs included false information. This poses significant risks to the safety of any upstream or downstream facility and begs the question of how a company may verify the skills and
qualifications of these contracted workers.

Looking to the solutions, in his report Elliott highlights the need to bring in more machinery to assist the workforce, specifically data storage machinery or “intelligent, automated systems designed to capture data, learn from events, optimise production and prevent safety-related incidents”.

“To combat the loss of knowledge retained by people, intelligent systems are needed that are not just electronic filing cabinets, but capture knowledge in use and deliver the right information, to the right person, at the right time, as part of day-to-day operations,” Elliott explained.

While it could enhance production and tackle problems brought on by a high staff turnover, there is still the issue of reducing the errors made by the workforce. On the other hand, behavioural safety, as explained by EPC, is a specific form of health and safety policy, which aims to change an individual’s attitude while working and trying to create a workforce with a unified approach to safety. Gibbins explained that it is about changing the antecedent, the reasoning that goes into every person’s action onsite.

“There are many ways that people can take short cuts and take risks and the idea of behavioural safety is to get people to constantly think about the way they work and the way they do things and say to themselves ‘is it safe?’ and also look at the people around them,” Gibbins said.

There are any number of risks threatening the safety of oil and gas facilities and operations, all of which come down to natural human error. Even installing more machinery would include human involvement in the design, installation, and maintenance processes. It is impossible to remove human error, but the key appears to be channelling significant energy into up-to-date health and safety training and striving for complete transparency of the entire workforce.